The Problem with Fly-Tipping

We are OPEN for business during this Covid-19 shut down period. Some service levels may be reduced in some areas but we are working as hard as ever! 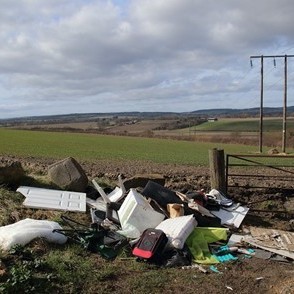 Fly-tipping is a major, on-going problem, exacerbated by lockdown. Fly-tipping or the dumping of waste in a non-authorised location is illegal, with harsh penalties including fines or even prison, depending on the severity.

The effects of fly-tipping:

Whilst facilities such as landfills are appropriately designed to prevent waste mixing or seeping into the ground. Naturally if waste is irresponsibly dumped, these safeguards are not in place. Therefore, the surrounding area would be polluted and toxins from hazardous waste may seep into the soil and have an adverse effect on drinking water.

As well as the possible effects from the toxins of waste, there is also the physical consequences of fly-tipping, e.g. unstable piles of waste or exposed sharp materials such as nails could be unsafe for anyone who came into contact.

Typically, the materials most likely to be dumped are rubber tyres, electrical appliances and equipment that is a fire hazard, which could harm or destroy local natural habitats. Piles of waste can also attract unwanted vermin such as rats or mosquitoes.
Repeated fly tipping in the same area can also have a negative effect on property values.

Who picks up the tab?

A person identified as dumping waste can be fined up to £20,000 - With them either caught in the act or leaving waste that can be traced back to them. If the case is taken to Crown Court, fines can be unlimited, and a prison sentence could be given.
If a 'cowboy' waste removal company is hired and fly tip waste, the owner of the waste could be fined up to £5,000 and receive a prison sentence.
If no owner is found, it is unfortunately the responsibility of the local council or landowner to pick up the tab and remove the waste
It is probably no surprise since lockdown, fly tipping has been on the increase but it might shock you to know the level of fly tipping has gone up 300%. A massive figure which is a struggle for county's and councils to deal with. We have been out of a national lockdown for a few months now and with more and more waste stations opening the numbers are reducing, but remain high.

Fly tipping is a real problem with serious consequences for more than just the environment. If we can help to spread awareness, then we can help to beat the cause.